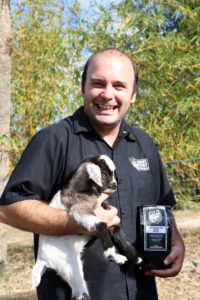 The quest for the perfect cup of coffee began in Minnesota where Brian Abernathy grew up and became accustomed to having access to great coffee. After relocating to Southwest Florida, Brian struggled to find that perfect cup of coffee and took it upon himself to solve that problem. “There wasn’t much of a coffee scene here, especially coming from the Minneapolis area. I really missed that.”

Tired of subpar roasts, Abernathy took it upon himself in 2016 when he purchased a roaster and began to home in on producing the perfect cup of coffee.

Brian’s mission is simple – make freshly roasted, single-origin and gourmet grade coffee both exciting and approachable for everyone. Brian is very selective about which coffee beans to import. He focuses on coffee that is high altitude, 100% Arabica and fully traceable.

“Fully traceable means that I know where the beans are coming from. I know when they are harvested, when they’re sent to the washing station, when they’re set afloat. I know if they have certifications like USDA certified organic fair trade. In terms of single origin, it’s a lot like wine. I know the regions, I know the altitudes, I know the varietals that make up the coffee I bring in.”

Similar to wines, coffee is graded on a 100 point system by professional cuppers. Brian is committed to only selecting coffee beans rated 86 points or higher.

Brian is often asked where he came up with the Grumpy Goat name. As the story goes, coffee was discovered by a goat herder in Ethiopia. He noticed his herd of goats were highly energetic after eating little red berries off of the trees and were up all night dancing and frolicking. But why grumpy? Well, we all know how a lot of us feel first thing in the morning before we have our coffee. And so Grumpy Goat was born.